This week I’ve been reading about the amazing work being done by food banks. Inevitably, it’s got me thinking. First I give heartfelt thanks that we are fortunate enough to be able to put food on the table ourselves and we don’t know the meaning of the word hunger. But most importantly perhaps, I’ve been wondering what can be done to prevent so many people going hungry?

The first food bank opened its doors in the US in 1967. Here in the UK, the Trussell Trust’s first food bank was launched in 2000 from a shed in Salisbury. Today, the charity has over 400 food banks, and many more independently-run food banks are opening almost daily. While the recession is believed to be behind us, its legacy of hunger and deprivation lingers on.

The growing number of people being supported by food banks is a complex problem to which there is no easy answer. Should we be hanging our head in shame about the number of hungry people – both adults and children – right here in the UK? Hunger is something we associate with third world countries, famines and droughts. It’s not something we’re comfortable with in our own back yard.

An article in the Spectator states we should be proud of our food banks. They are an indication of the strength of the fabric of our whole society. I wholeheartedly agree that we must be proud of the food bank movement and everyone who contributes to them. But less proud, perhaps, of the system that makes them necessary. 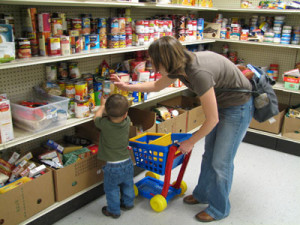 I’m not a politician or an economist. I’m a marketer working in the food industry. I don’t have all the answers. I don’t even know all the questions. But I believe it’s time we looked at the bigger picture.

Many media reports blame our slow benefits’ system for the increase in demand for food bank support. If you’ve lost your job and it takes weeks before your unemployment benefits come through, you’re not going to have money to spend on food. So speed up the system – easy answer. Except it’s not.

Both national and local government have had to make cutbacks and turning benefit claims around quickly means employing more staff. That costs money. Where does the money come from? It either comes from cutting back on other services, which causes another set of problems, or it comes out of our pocket in increased taxes. I suspect a lot of the people who happily donate to food banks complain bitterly when their council tax bill rises or they have to pay more in tax. This is a damned if you do – damned if you don’t situation.

Food banks have taken a lot of flak from the politicians themselves. Earlier this year, Norman–get-on-your-bike-Tebbit claimed people were using food banks and spending the money they saved on junk food. Lord Freud, the Conservative welfare minister said “However, it is very hard to know why people go to them.”

It might be for you m’Lord. And are you actually in the right job and how much are you being paid for your sensitive insights, Lord Freud?

Of course there are always going to be people who exploit food banks in exactly the same way they exploit the benefits’ system and everything else. I am tempted to say in the light of  the MPs and their dodgy expenses claims, half of them might be in Whitehall.

Another worrying school of thought is that people who need the support of food banks have brought it on themselves, that they’re lazy and don’t want to work or they’ve made the wrong choices so they deserve to go hungry. This is the sort of attitude which only makes the situation worse. I am sure there are many people out there who won’t ask for a food bank referral simply because they’re too embarrassed and perceive there’s some sort of stigma attached.

What about all those people, often young families, who don’t qualify for benefits and can’t get a food bank referral, but are struggling to survive. Parenting website Net Mums carried out a survey which suggests one in five mothers are missing meals because there simply isn’t enough food to go around. 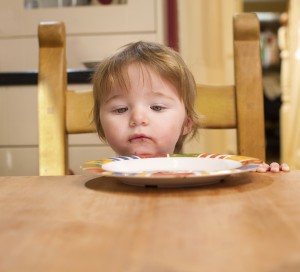 Of course, the first thing that needs to be done is exactly what the food banks are addressing. They’re putting food on people’s plates. But we need to go back to basics.

Why aren’t we addressing the educational aspect of food and teaching people to cook. Kids no longer learn to cook at school like they used to. If you’re on a tight budget, being able to knock up a decent meal from low-cost ingredients is a no-brainer. And yes, I do know I’ve said this before!

Should we be investing more in community gardens where people can learn to grow some of their own food? That’s what happened during the war years when food was rationed. I’m not suggesting enforced labour, but working on a project like this could be a big morale booster and put food on the table for someone who can’t find work.

Should we be looking after our neighbours more and sharing our food? In an article in the Glasgow Evening Times, Janey Godley remembered neighbours sharing food rather than letting it go to waste.

There are so many questions and not enough answers. Until someone, someday, finds the solution, please remember food banks can only help others if we help them. So the next time you go to the supermarket, please be generous and do your bit.