I’m pig sick of people putting their heads in the sand. Clichés or not, that’s just what’s happening with the ‘Pig Idea’ debate. While the Pig Idea isn’t new, it is a modern take on an old answer to a BIG problem. So first of all, what is The Pig Idea? It’s a scheme where the nation’s surplus food is used to feed pigs. Sound familiar? Of course it does. For generations pigs were fed quite happily and successfully on swill. Why, you might ask, is this causing so much debate? Surely, it makes sense? It does to me anyway.

So let’s look at the problem. Some of this might sound just a tad familiar, so forgive me for harping on:

So why the heck are we not using our food waste? Isn’t it a valuable resource that’s currently going into landfill? The answer is the Anderson enquiry which ‘tentatively concluded’ in 2001 that the foot and mouth outbreak was caused by a farm feeding its pigs on waste food from a restaurant. The ban was meant to be temporary, but the power puppets in Europe decided it was a jolly good idea and instead of reversing the ban, they extended it to cover all the EU countries.

Behind the Pig Idea is environmentalist Tristram Stuart and chef and food campaigner Thomasina Miers. The Pig Idea’s supporters, their ‘hambassadors’, reads like the food industry Who’s Who and includes Michel Roux Jr, Giles Coren and Hugh Fearnley-Whittingstall, and of course us here at Nina & Co.

Tristram Stuart and Thomasina Miers state that sensitive rain forests are being destroyed to provide land for soy crops which are destined for animal feed. However, this is something critics refute.

Alastair Butler, a pig farmer and board member of BPEX dismisses this argument in the Huffington Post by saying in the past ten years, pig farmers have reduced the amount of soya feed by 50%. Instead they’re feeding their pigs with UK-produced vegetables such as green beans and peas.

I’m sorry Alastair, but you seem to be missing the point here. And that point is people are going hungry while we’re throwing food away. The UK is dependent on food imports, yet we still toss away millions of tonnes of the stuff each year. And that’s food which could be fed to pigs. So whether it comes from the Amazon or from a farm in Lincolnshire, it’s still food which could be put to better use. 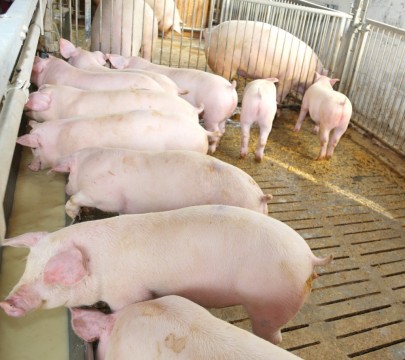 Mr Butler also argues pork imported from overseas might be contaminated and this could end up being fed to the nation’s pigs. Fair point, BUT surely if our small farmers had an economically viable means of feeding their pigs, we wouldn’t need to import pork. He also seems to have missed (or ignored) the point that the Pig Idea is to process this food waste with strict biosecurity controls in place.

And apart from the contamination issue, why are we still buying pork from countries which don’t comply with our animal welfare standards? The BPEX report on pork imports makes interesting reading. It concludes…

“Retailers and caterers, together with processors, need to work with producers to ensure a sustainable future for the pig sector.”

Isn’t that what the Pig Idea is working towards? By putting waste food to good use, the UK national pig herd could grow and we would have a sustainable supply of high-welfare pork.

Alastair Butler also suggests our waste food could be anaerobically digested to produce electricity. He reckons that would power some 600,000 homes. The Pig Idea says the carbon emissions in producing electricity from food waste are 20 times greater than if we use it as pig food. I’m all in favour of sustainable energy, but I’m not sure the idea of powering just 2.4% of the UK’s 25 million homes works when 870 million people are going hungry across the world.

Isn’t it about time all these critics got their heads out of the sand and started realising we have a serious problem that’s getting worse by the day. And instead of pooh-poohing sensible suggestions, put their energies to better use by helping create a sustainable solution.

If it’s taken you just two minutes to read this, be aware that 36 people will have died of starvation during that time. We can’t do anything about that overnight, but if enough of us support initiatives like The Pig Idea perhaps one day, we will change the world.