Who would have thought when the first supermarkets opened their doors in the 1950s that they would be holding us to ransom a couple of generations later. Service has gone out the window for the sake of profits and we’re being press ganged into DIY shopping whether we like it or not.

It’s clear many UK shoppers are not in love with self-service. You only have to go into any supermarket to see knee-deep queues at the manned checkouts and all their time-saving (aka money-saving) automated ones standing empty. 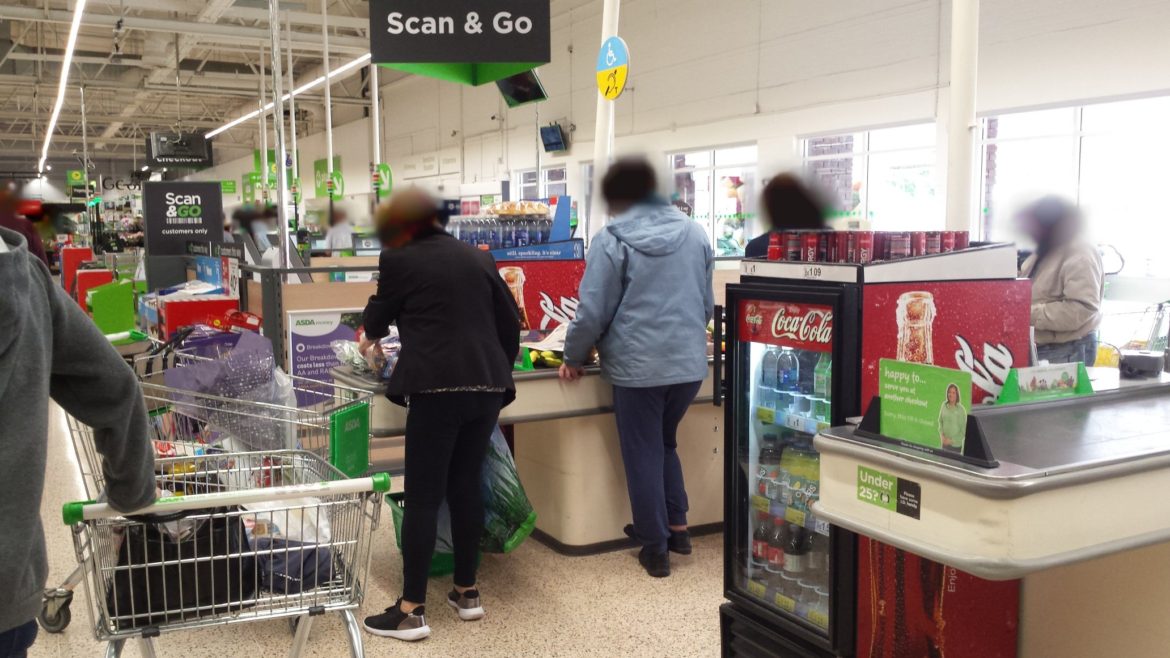 One of the Nina & Co. team was in an Asda store just the other day. The store wasn’t busy. Only three proper checkouts were open. Each one had long queues of impatient shoppers with trolleys full of shopping. By contrast, there were hardly any shoppers at the DIY terminals and none at all at the ‘Scan and Go’. That says it all, in my opinion, but why should the mighty supermarkets care? If they punish us enough by making us queue, perhaps we’ll toe the line next time we shop. Scan and go, if you haven’t come across it, it is the next generation of automated checkout system that involves a phone app and card-only payments.

Maybe working for likes of Tesco or Asda isn’t everyone’s idea of a dream job, but for many people, this is their only source of employment and income. I firmly believe that every time we use a self-service checkout, we’re putting another nail in the coffin of employment.

Now you might be smug and think that isn’t your problem. Why should you worry? Well, trust me, you should. Currently around 200,000 people are employed as supermarket cashiers in the UK. Do away with their jobs and who will be paying for those unemployment benefits? You and me, that’s who.

What about the councils having to pay more in housing benefits for people who cannot afford to pay their rent? No amount of state benefits and financial support can compensate for the loss of self-esteem that comes from being made redundant and being unable to find another job. And for the shoppers, automated checkouts are no compensation for a friendly smile and some human interaction. 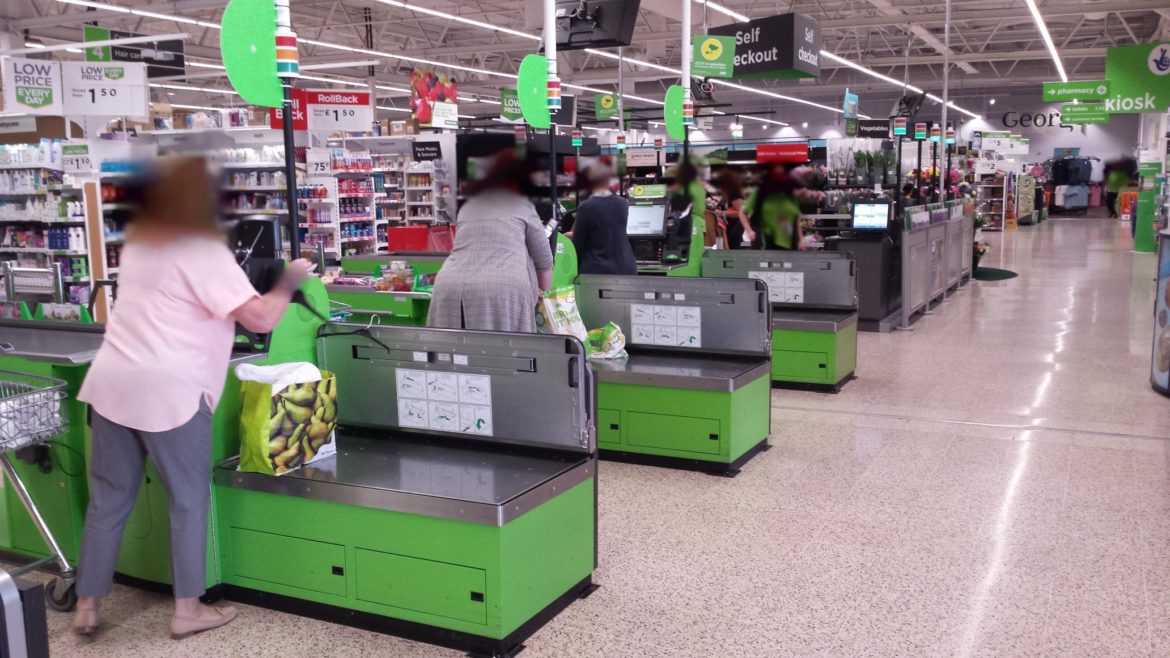 It’s often argued that the self-service checkouts vs manned ones controversy is nothing more than a generation divide. To some extent I think that’s true. Of course, these new fangled systems are intimidating to some older people who simply don’t understand how they work. But it’s not always because the older generation are technophobes and don’t believe in progress. I am all in favour of progress but that doesn’t include greedy supermarket chains making more money at the expense of the consumer and people’s jobs.

If you believe it’s all about age and different generations, don’t forget, the older generation are the lucky ones. They know what service is. Look at the pictures – these aren’t some mocked-up Photoshop enhancements. The people in the queues aren’t a load of bumbling geriatrics. They are all ages and all people who expect the same thing. And that’s some good old-fashioned customer service.

I laughed when I read this gem! A group of MPs led by a Chuka Umunna, have come up with the bright idea of charging the customer an extra 1p (yes – one penny) every time they use a self-service checkout. I just hope it wasn’t my local MPs who were wasting their time and all that money producing this pathetic scheme. According to their deluded logic, these checkouts have led to the afore mentioned generation divide. And that 1p charge should go towards funding initiatives to ‘strengthen intergenerational projects across the country’. Balderdash!

Actually Mr Umunna … I have a better idea. And it didn’t take a think tank, a 56 page report or a huge cost to the British taxpayer to come up with it. How about the supermarkets give everyone a 10% discount for using the self-service checkouts? And the money we save can go towards the increased taxation and council tax that we will have to pay. Or better still, take that 10% direct as a government levy to subsidise unemployment costs. Just don’t give it to our pal Chuka and his 20 cronies. They’ll only spend it on another hairbrained scheme to get their names in the paper. 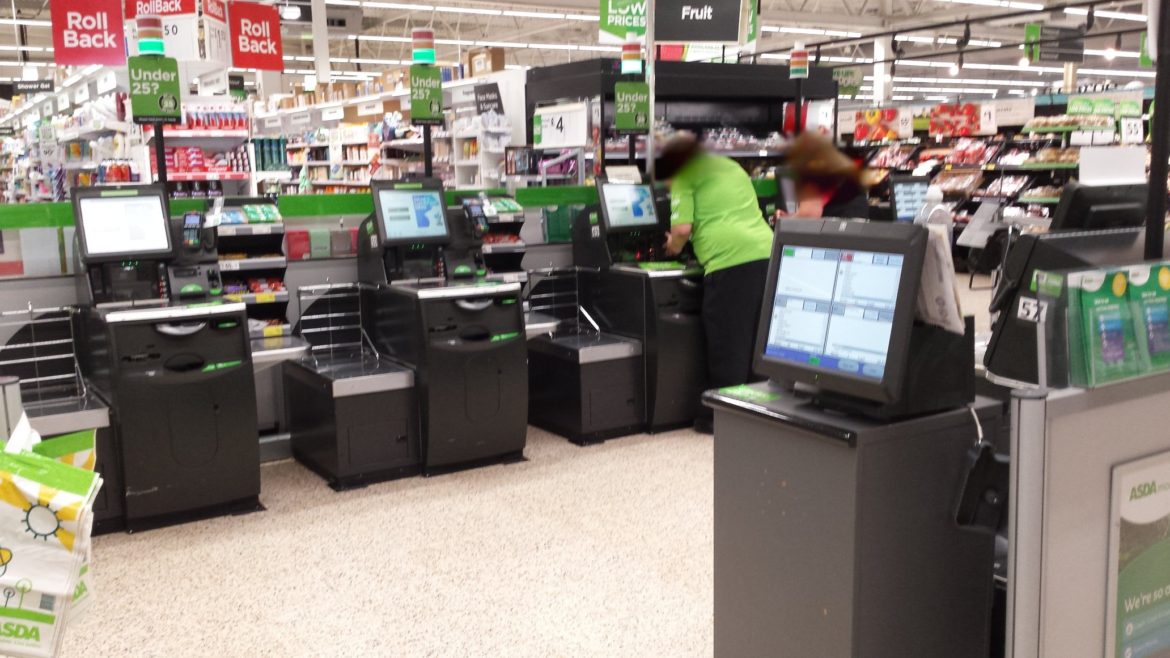 So how can the customers fight back? First of all, don’t give in and use the self-service tills. Support your local farm shops and small traders. I appreciate there are not many of them, particularly in our towns and cities. Many farm shops and artisan producers sell online, but that does add to the cost and the food miles, of course. And neither of those options help when you want to stock up on things like washing up liquid, loo rolls and baked beans.

Bully the supermarkets back! If there are not enough checkouts open, complain to a member of staff and ask for more to be opened. That’s what our roving reporter did on her recent Asda trip. She left her trolley in the queue and went off to demand more were opened (and took a few pictures while she was at it).

Of course, doing your supermarket shopping online might help. It costs the supermarkets money in staff time to pick all your shopping and then they have to pay for the driver’s time and fuel costs. That way, they are forced to deliver a ‘service’, keep people in work, and they foot the bill!

The supermarkets think they can bully us into submission, but we do have a voice. It’s time to stand together and use it to stop this stranglehold the supermarkets have over us before it goes any further.