I’m horrified, sickened and bewildered in equal measures about the modern slavery revelations and recent prosecutions in the Midlands. Apart from the appalling fact that this is going on here in the UK, it concerns me that so many of us are unwittingly complicit by shopping at our local supermarkets. How can this happen in our so-called civilised society? And how can companies, of any type, deny responsibility if their suppliers are using slave labour?

What is thought to be the UK’s biggest human trafficking gang had slaves working on farms which supply supermarkets such as Waitrose, M&S, Tesco, Asda and Sainsbury’s. If you think your life is untouched by the misery of these poor people’s existence, then think again. The person who picked and packed your supermarket spring onions or mushrooms, for example, could well have been a modern day slave.

This is the part I find so hard to believe. We live in a country that ties itself up in red tape. We’re constantly tripping over quality standards. Businesses are subjected to form-filling and legislation nightmares. And it all seems to be for nothing when you read about something like this.

A Times investigation says there is no suggestion that the supermarkets and companies involved were complicit in any wrong-doing, and that’s really what I find so hard to understand. This isn’t just the Nina & Co. team having another pop at the supermarkets. I firmly believe in ethical business practices. It doesn’t matter if you are a supermarket, a butcher, a baker or a candlestick maker, surely, being responsible for your work force and people’s welfare is a top priority.

I’ve tried to find more about the supermarkets’ involvement without success. I understand from the news reports that these slave masters are sophisticated and many of the people employed appeared to come from reliable and ethical sources.

But as an employer myself, I am bemused as to why there were seemingly no clues to these people’s plight. Am I naive in thinking they all gave the appearance of living full and happy lives? Why were the farms and other companies who employed these people oblivious to their situation? Frankly, I think there is a lot of complicitness going around and I think all the companies involved must share the blame. There should be an investigation and if they haven’t complied with the law, then they should be prosecuted too. 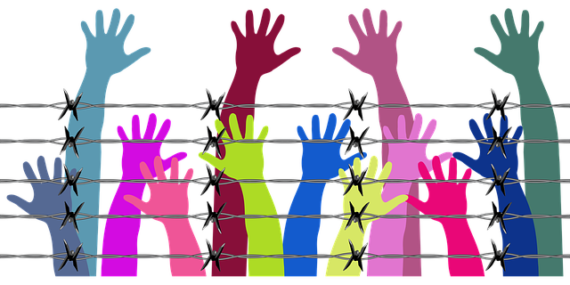 Each of the supermarkets mentioned in the news reports have modern slavery policies and statements, as required under the Modern Slavery Act of 2015. In light of these prosecutions, this sounds like lip service and a box ticking exercise, at best. What about their procedures and processes? Don’t supermarkets check their suppliers to ensure this doesn’t happen… can’t happen? Follow the links below to read their official lines on slavery. You’ve probably already clicked on the other links which demonstrate how they’ve failed.

Waitrose’s latest policy issued in 2019 starts by saying ‘This statement has been published in accordance with the Modern Slavery Act 2015. It sets out the steps taken by John Lewis plc and other relevant group companies during the year ending 26th January 2019 to prevent modern slavery and human trafficking in its business and supply chains.’

Asda says ‘The fact that modern slavery exists anywhere in the world in 2019 is unacceptable, and at Asda we’re determined to do everything we can to identify and address it within our business processes and supply chain.’

Marks & Spencers’ policy states ‘This statement has been published in accordance with the Modern Slavery Act 2015. It sets out the steps taken by Marks and Spencer Group plc and other relevant group companies (“M&S”) during year ending 31st March 2018 to prevent modern slavery and human trafficking in its business and supply chains.’

Tesco’s modern slavery document says ‘The UK Modern Slavery Act 2015 requires businesses to state the actions they have taken during the financial year to ensure modern slavery is not taking place in their operations and supply chains. Tesco is fully committed to playing our part in eradicating modern slavery. We firmly support transparency and collaboration to eliminate the risks of modern slavery.’

Sainsbury’s assure us that ‘We want to make sure everyone in our supply chains is treated fairly, in Britain and around the world.‘

It’s interesting and telling that the Waitrose and M&S policies start with exactly the same wording. Was this a cut-price BOGOF offer from a box-ticking statement writer instead of a carefully thought-out commitment?

It’s clear from the reports that we all have to be vigilant. The National Crime Agency says around 13,000 people are affected by slavery in the UK. In 2017, 130 people were prosecuted under the Modern Slavery Act. Some 5,000 people have been supported by the Slavery National Referral Mechanism and even worse, over 2,000 of these were children. These people are being ‘employed’ by companies across the UK. They live in our streets and in our towns and we must try to do our bit to stamp out this evil practice.

There are a great many organisations working to prevent human trafficking and slavery. You’ll find information on spotting the signs on the Salvation Army website and the Hope for Justice site. Please read them and if you suspect someone is a victim of this barbaric trade, report it.

I can only hope, as this story continues to unfold, that the supermarkets and their suppliers have the guts and the honesty to do something about it and stop writing meaningless statements they don’t enforce. This is about human life – not lip-service. No matter how far down the food chain it is, there is no shirking this responsibility.