Why are UK Governments so fond of voluntary standards? Is it so they can claim they’ve told us so, before they wash their hands of the whole situation?

This time it’s the standards of food in English hospitals that’s making me mad. New principles were set out last year. Now they’ve announced yet another review. This has been going on for over 20 years. Can no-one get a grip of the situation? If they can’t, my phone number’s on the website. Nina & Co will sort them out!

Both Scotland and Wales have set nutritional standards for hospital food, so it can be done. We all know the importance of sound nutrition in aiding the recovery process for patients.

So what’s going on in England? One study looked at 35 hospital ready meals served to patients in England. They found 27 would be red for saturated fat or salt content under the traffic light labelling scheme. Five of these  contained more saturated fat than the NHS recommends for an entire day. One meal would actually be banned in Wales and Scotland. This is a classic case of the Government saying ‘do what I say… not what I do!

And there’s a big gap between patient and NHS opinion. 95 out of 156 NHS hospital trusts in England rate the quality of their meals as five-out-of-five. Well, they would, wouldn’t they? Do you seriously think they’ll hold their hands up and say our food’s b***** awful?

I’m pleased to say this has been challenged by the Campaign for Better Hospital Food (CBHF). They highlighted an independent Care Quality Commission survey, revealing half of patients were dissatisfied with hospital food. Charity forCrohns conducted a poll of 64 patients. 57% said the food they had in hospital was “poor” or “awful”. 46% believed their recoveries were “delayed or restricted” because of poor food quality.

If patients don’t like it, they don’t eat it. So as well as affecting patient recovery, this is another example of an appalling waste of food. 30 million meals thrown away every year. And for anyone who thinks this is about budgets and funding – think again. Where’s the financial sense in throwing away this amount of food? 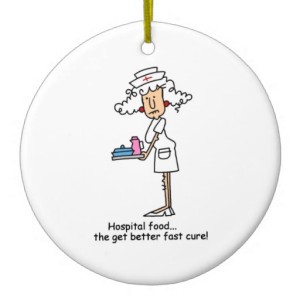 I know! Let’s take a really radical approach. How about making the food so good that patients enjoy the meals and get better faster?  That would work, wouldn’t it? After all, sound nutrition supports patient recovery. Ultimately, that means people can be discharged faster and less money would be needed for drugs and all the other essentials. And that would shorten the waiting lists and free up beds, as well as save money. But perhaps this line of thinking is just a bit too ‘blue sky’ for the powers that be.

It’s not just food that’s being wasted. The money spent on failed voluntary schemes over the past 21 years is calculated to be an incredible £54m. Sustain, the group of organisations behind the CBHF, lists 21 ineffective initiatives from 1992 and 2013. All these reviews had thoroughly researched the problems. None had succeeded in solving them. Why?  Because recommendations weren’t compulsory so it didn’t happen.

There are questions too about the way hospital food is sourced. The NHS did set out to ensure food was sourced sustainably, but as you know… the road  to hell is always paved with good intentions. And the NHS is still being criticised over its use of meat from intensively reared animals.

Celebrity chefs have been involved in these campaigns for years and support compulsory nutritional standards. Loyd Grossman led the Government’s Better Hospital Food initiative between 2001 and 2006. He believes there’s been no noticeable change in the way hospital food is produced, saying it’s ‘hampered by a lack of political will’.

Full credit to chef James Martin for carrying on with the fight. He spent time in hospital kitchens looking at problems including overspend, wasted food and low morale of kitchen teams. And it did show many of the kitchen staff do care about the food they produce.

There are also English hospitals where it appears food is better quality than the headlines would have us believe. Full credit to them too. But there are still too many others that need to take a leaf out of their (recipe) book.

I’m not optimistic we’re going to see much progress. It’s about time they call a halt to these expensive never-ending reviews. Let’s start doing something meaningful with the results instead.