Home
|
Food>Ethical
|
What happened to waste not, want not?
September 3, 2013 Food>Ethical, local and sustainable
0

In WW2, it was a criminal offence to waste food and that’s one part of the wartime culture I’d like to see brought back today. Oh dear! It’s only the first paragraph and I’m already ranting.

But the facts speak for themselves:

Scary, isn’t it? Next year or even next week – that could be YOU or me! So what can we do about it?

Much of the food wasted is blamed on the supermarket’s BOGOF (buy one get one free) offers, too much focus on the cosmetic appearance of our food and confusion over sell-by dates.

But at least some of the supermarkets are getting their act together and doing something to help. Sainsburys was one of FoodShare’s earliest partners. Foodshare is an international charity, which donates food to other local charities. Tesco, ASDA and Morrisons also contribute to FoodShare, but it’s still not enough and food poverty is on the increase.

Waitrose is a supporter of Tristram Stuart’s campaign, ‘Feeding the 5000’. This campaign’s latest initiative is the ‘Gleaning Network’. Huge amounts of fresh fruit and vegetables are wasted on UK farms every year. Farmers often can’t sell their crops because they don’t meet the retailer’s cosmetic standards or because of overproduction. The Gleaning Network’s goal is to salvage this surplus and distribute it to food charities.

Sadly, there are a lot of supermarket chains not mentioned here, and despite a lot of digging, I couldn’t find any evidence about what they do with their surplus foods. Hey Co-op, Lidl, Budgeons – what about you? What happens to your surplus food?

And what about all the fruit and vegetables that don’t meet the cosmetic standards? Who is to blame for that? Is it the supermarkets that decreed carrots should be straight and apples must red?  Or is it our fault for going along with their nonsense? 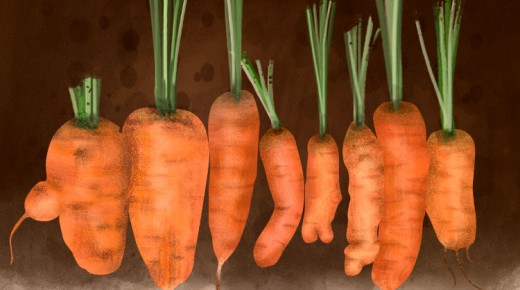 Perhaps it was us, the electorate, who sent the politicians to Brussels. Needless to say our friends in the EU have their fingers (straight and of uniform sizes, I hope) in this particular pie.  For example, Class 1 produce has strict standards for size. For example, ‘large’ apples must be at least 65mm in diameter. Red apples must have at least half of the surface coloured red and the size of any blemishes are strictly controlled.

What sort of nonsense is this? Have you ever tried growing your own fruit and veg? Would you bin your carrots if they were misshapen or let your apple crop rot if it wasn’t red enough? No. You’d eat and enjoy them, of course!

So you supermarket chains – it’s very commendable to be supporting the food charities and I doff my hat to you, but how about going a step further. Why aren’t you lobbying the EU for a return to the days when farmers grew food, shops sold it, and bureaucrats stuck to politics?  We’d be better for it… and so would those people who died of starvation in the time it’s taken you to read this.