If you haven’t heard all the furore about horsemeat found in burgers, I don’t know where you’ve been hiding for the past couple of weeks.

The media had a field day (excuse the pun) and, of course, the jokes were flying on social media within minutes of the news breaking. I did particularly enjoy the video of the horse in Tesco looking for its family, but suggest Dobbin’s friends brush up on their camera skills before making the sequel.

Jokes apart, in my opinion this highlights two major concerns …

The first must surely be the need for accurate food labelling and traceability in our food chain. The burgers containing the 30% horsemeat were found in Irish stores and traces of horse and pig DNA were found in products in the UK.

But wherever the sources, I believe it’s important we all know what we’re eating and where it comes from. There should be no labelling discrimination between ‘premium’ products and ‘economy’ or ‘value’ ranges. If it says ‘beef’ – then that’s what it should be – regardless of the cost of the product. And what’s more, we should know its provenance too.

Generally, us Brits are horrified at the idea of eating horse. I suppose you could argue that it’s not a lot different to eating pork, lamb or beef. To me, horses are pets and not something I want on my plate, thank you very much!

This debacle can only be good news for our high street butchers though, who I hope have benefited from increased sales as a result. And if you’re still put off the whole burger business, it’s not hard to make your own. That way you can be quite certain about what goes in them! 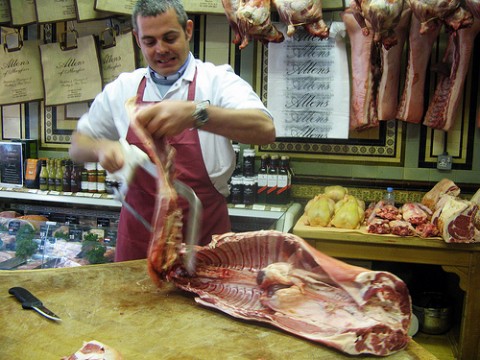 My second concern is the traces of horse and pig DNA in the products. What is a ‘trace’? Exactly how much constitutes a ‘trace’? What are the implications for people who don’t eat certain meats for religious reasons? And perhaps the biggest question of all … how can it be prevented from happening again?

We’re all used to seeing products labelled with the warning ‘May contain nuts’. That’s needed because it is impossible to eradicate all traces of nuts – a potentially fatal allergen – from manufacturing plants.

So if you can’t guarantee something is nut-free if nuts and seeds are used in that factory, how can an abattoir prevent cross contamination of DNA? In the UK, abattoirs are licensed to slaughter certain animals. Although horsemeat is not eaten in the UK, some abattoirs do slaughter horses with the meat going to export.

Now if you’re a crime fiction or CSI aficionado, you’ll know criminals can be brought to justice by leaving behind the most minute trace of DNA. So how can an abattoir or a food processing plant expect to eliminate all traces of an animal’s DNA?

So what’s the answer? Perhaps abattoirs should be licensed to only slaughter one type of animal. In theory, that would work – but in practice, it’s not viable. In 1985 there were more than 1000 abattoirs in the UK. In 2008, the number of red meat abattoirs had fallen to 285.

In many parts of the UK, farmers already have to travel considerable distances to take their stock to slaughter because of the decline in abattoir numbers. If their nearest abattoir could only process one type of animal, that problem would be exacerbated. And apart from the animal welfare considerations, the increased cost would result in higher meat prices and farmers going out of business.

So, do we have to overcome our revulsion at the prospect of having ‘traces’ of other animals’ DNA in our food? In the future, will every burger, sausage or piece of meat simply be labelled ‘Warning – may contain horse’?

I wish I knew, but one thing’s for sure, you’re more likely to get honest answers from your high street butcher than from the supermarkets.