I am incandescent! Reading about Sir Terry Leahy’s glib comments on Dessert Island Discs took me from rant to full-blown rage in less than 60 seconds.

So the closure of small shops is progress is it, Terry? Perhaps it is for you fat-cat-types. What about all the people who have suffered because of small shops closing – and that’s more than a few butchers’ families.  Unlike you, I’m sure they didn’t leave their jobs with a king-size bowl of cream!

In my opinion, supermarkets are responsible for more than small shops closing down. The supermarket culture must take the blame for a lot of our social decline: we have villages with no shops or pubs, binge drinking caused by readily available cheap booze, and whole communities of strangers who can’t or don’t pass the time of day with neighbours in the local shop.

I know I’ve said all this before in my earlier blog about supermarkets, but this type of dismissive comment makes me want to say it all over again.

What about our town centres then, Terry? As well as villages with no heart, can we expect to see tumble weed blowing down the pedestrian precincts in our ghost towns? Will they soon be full of nothing more than pawn shops, pound shops and banks? 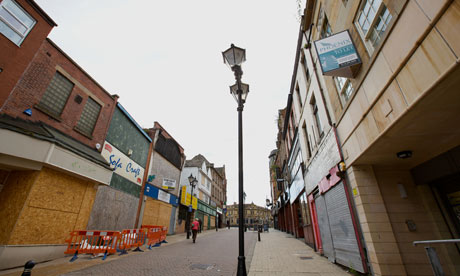 Banbury, my local market town, is full of boarded up shops. The local shopping centre is half empty and nobody is doing anything about it.

Isn’t it about time the council made it easier for small retailers by reducing rents and business rates? And what about the customers? Prohibitive parking charges are making a bad situation worse. Why would you pay several pounds an hour to park just to visit a ghost town?

It’s not rocket science, is it? Support the small retailers, reduce or abolish the car parking charges, and encourage people back to the small shops that were once at the heart of our community. Our economy is supported by these small businesses – they’re the ones who pay their taxes – unlike the Starbucks, Boots and Topshop of this world who don’t.

But it’s not just the supermarkets who have a stranglehold on our society and economy. The banks are now forcing small solicitors out of business. If you’re buying a property, why the hell should the likes of Santander dictate which company does your conveyancing? The Banks are Bad for Business campaign is fighting that corner, at least. Let’s hope David Cameron and his Government keep their pledge to help, or he might find the small business electorate voting with their feet.

But don’t think I’m finished with you yet, Sir Terry, because I’m not. In light of the continuing revelations about horsemeat, I wonder what you’d say today about your offhand comment, “Small benefits for thousands of families can be a big loss for the family of the butcher…”

While I might not like it, I can understand the problems in eliminating all traces of horse DNA in other meat, but these shocking disclosures are nothing less than criminal.

What is it to be? Is criminal activity at the heart of this horsemeat scandal, as Environment Secretary Owen Paterson told the House of Commons just the other day? Or don’t the supermarket and food processor fat cats care about people on low incomes buying ‘economy’ processed food? Perhaps they think they should be grateful to have any meat at all?  On the other hand, perhaps the ‘powers that be’ are too busy pontificating about progress to be bothered to manage their empires properly.

To me, all this demonstrates the callous attitude and all that’s wrong with the big business culture in the UK. It’s the sort of culture where bad practice, immorality and money grabbing abound – and they still have the gall to stand up and call it ‘progress’.