We hear so much about the crackdown against bullying in schools, but when one young girl decided to begin documenting the quality of her canteen lunch in a blog – and it became a very, very popular blog indeed, so the local authority threatened her into silence…

Martha Payne, aged just 9-years-old, set up her NeverSeconds blog – with just a little help from her Dad, David – six weeks ago, to raise money for her JustGiving page (in aid of Mary’s Meals: a charity which provides food for schoolchildren in some of the poorest regions around the world) by cataloguing the standard of school dinners at her primary school at Lochgilphead in Argyll, Scotland – and it’s fair to say that the standard wasn’t very high. 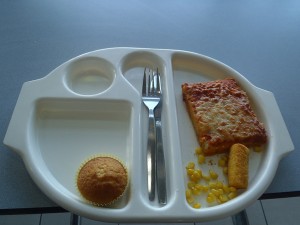 So, rather than pull their socks up, admit their failings and set about giving schoolchildren the delicious and nutritious fuel they so badly need to power their crazy, hyperactive lives, Argyll & Bute Council pulled out the bureaucratic sledgehammer.

On her blog, in a post entitled ‘Goodbye’, Martha wrote:

“This morning in maths I got taken out of class by my head teacher and taken to her office. I was told that I could not take any more photos of my school dinners.”

And that could have been that…

Unfortunately for the men and women in black at A&BC – much to their humiliation – they hadn’t countered in the fact that Martha’s blog had already gone viral, and she picked up support from such culinary superstars as Jamie Oliver, Nick Nairn and Raymond Blanc, who, in turn, gathered the support of countless thousands of other voices, all around the world.

When politicians and bureaucrats are under pressure from the vocal masses, there are generally two options:

1. Bring in the military.

2. Backtrack with cap in hand.

I’m delighted to say that the Paramilitary Wing of the Argyll & Bute Council wasn’t dispatched, on this occasional, and that Martha’s (ridiculous) gagging order was lifted, with humility, within just 24 hours.

The very positive effect of this whole debacle was that the publicity surrounding Martha’s blog helped raise donations to her Just Giving page to – at the current count – an incredible £108, 062.97… enough to feed over 10,000 children for an entire year.

The downside is that the provision of nutritious food for school children is still a problem in the UK, and local authorities don’t like to admit it.

I used to work for a contract caterer that provided school meals when the whole ‘Jamie’s School Dinners’ thing kicked off, and as much as his heart was in the right place, he did tar everyone with the same brush…

As a result, and as customer numbers declined and services became unviable, many school dinner services closed. For too many of these kids, their school dinner was the only hot meal they ate.

The initial argument also seemed to forget it was the Local Education Authorities that gave caterers the paltry 17p per head budget, and it took a long time before this figure was increased to 42p. It’s been a few years since that happened, and I’m not sure of the exact figure now, but it won’t be much higher.

Plus, only five of a child’s 21 meals were actually eaten in school, so it would have been better to take a holistic approach; but I guess school meals was an easy target.

That sounds like I really hate Jamie and I’m towing the corporate line! I don’t and I’m not! I do think Jamie asked lots of questions, raised awareness of a problem that needed to be raised, and made the government make some radical changes to policy.

But this wasn’t without incident or casualties; some great services have closed and more and more children have to rely on packed meals (not a very healthy alternative to have white bread sandwiches, crisps, biscuits, sweets and sugar saturated soft drinks, in my book) or even worse… time and cash-strapped parents packing little Johnny off to school with a Dairylea Lunchable! 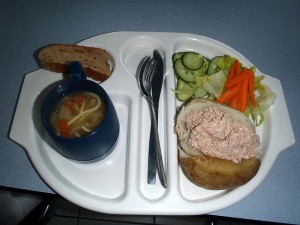 Martha has since said that the publicity surrounding her blog has led to ‘big improvements’ in the quality of the dinners served at her school… which is partly wonderful, but also very disturbing, because it shouldn’t have to take the spotlight of international publicity to give our children what they need – and they need good food.

You are what you eat. You don’t grow strong bones without the a good intake of calcium; you can’t build muscle without taking in protein…

So, well done to Martha for continuing to share her school lunch and for highlighting the fact that school meals still have a way to go, but more importantly for discovering, and publishing, the news that her school meals were supposed to – according to Government nutritional guidelines – have unlimited salad, unlimited bread and a piece of fresh fruit every day.

And let’s just remind ourselves of the brilliance of little Martha Payne:

Imagine, if every one of these fussy, defensive bureaucrats in Local Authorities put down their calculators and pens and looked at ways they could actually support our children with their ideas, dreams and ambitions – rather than trying to force them to be unquestioning clones of the system – what good could come of that?

Well that’s my 2p worth and rant over for today! Oops, sorry you got on the end of it!