When we think of the war years, we think of rationing, the blitz, camaraderie, and a nation of patriots digging up their lawns in the name of victory.

Even more than seventy years later, the war years still have a fascination for people of all ages, me included. If you missed Giles Coren and Sue Perkins in the The Supersizers Go… Wartime, you can watch the whole episode courtesy of YouTube.

I was keen to find out a bit more about life in war-torn Britain. What was on the ration and what wasn’t, and had I been around then, what would I have eaten? And, with all the problems with food waste and obesity today, would we all benefit from a spot of wartime catering ourselves?

Rationing was a gradual process, which started in January 1940. With only about a third of Britain’s food being home-grown, rationing was the only fair way of distributing food.

Food conveys were under attack from U-boats as they brought essential supplies to our island nation. The enemy was intent on starving the British into capitulation. But Mr Hitler hadn’t reckoned on the sterling efforts of Lord Woolton and the Ministry of Food. Advice and recipes were released to help the housewife make the most of her meagre rations. ‘National Bread’ and ‘Patriotic Pudding’ and ‘Woolton Pie’ were wartime menu highlights. 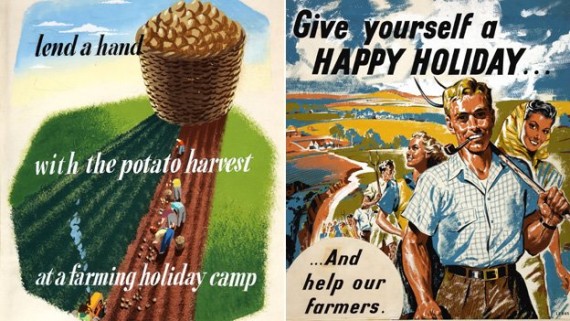 Growing your own was a way of life in the war years, and ornamental gardens were converted to vegetable patches the country over. With the commercial chicken flock culled to save on animal feed, many enterprising Brits kept a chicken or two to supplement the egg ration. And of course, if the hen stopped laying, it always had the pot to look forward to!

First ‘on the ration’ was bacon, butter and sugar. Gradually, other foodstuffs were added. A typical week’s wartime ration for one person would include:

Some foods such as bread, potatoes, flour, offal, and game were never rationed, but that’s not to say they were always available.

Fresh fish was a casualty of war. Commercial fishing was abandoned during the war years as crews were called up. Our fishing fleet were targets for the German navy, and many craft were requisitioned into service of King and country. No doubt small boys entertained themselves (as small boys do) on river or canal banks with sticks, string and worms, hoping to land their supper.

Next time you feel irritated by queues in the supermarket, think of your mother or grandmother in the war years. Queuing was a way of life for the wartime housewife, who might stand for an hour or two for little more than half a pound of tripe. 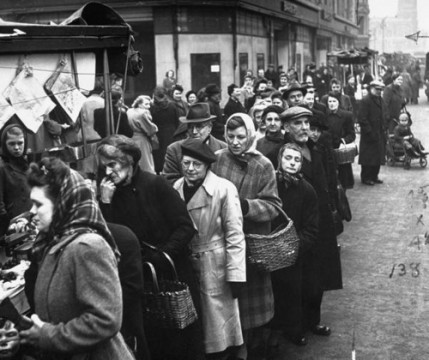 So would we benefit from a wartime diet? Undoubtedly! With its low fat, low sugar and high vegetable content, wartime did for the nation’s diet what the Five-a-Day campaign has been trying to achieve for the past ten years! Perhaps there’s a lesson to be learnt there?

And perhaps the most important lesson we could learn from the war years is about wasting food. Imagine a shopkeeper in the 1940s rejecting vegetables because they didn’t conform to a certain size or shape!

When I read that half Europe’s food goes to waste while people are starving, I wholeheartedly believe wasting food should be a criminal offence as it was during the war. The world’s population is growing and there’s not enough food to go round. Unless we all change our ways, the deprivations of wartime will be nothing compared to what might lie in store for us all in the future.