Well! Who watched the Great British Bake Off? Were you glued to your TVs?  We were and we’re jubilant about the UK becoming a nation of home-bakers again. Sceptics might call this just another food fad whipped into a frenzy by popularist TV programmes, of course. But is it just a fad or is home baking here to stay?

Depending on your age, you might remember the days when home baking was the norm not the exception. Mums and grandmothers (and the odd dad, one must suppose) would retreat to the kitchen, put their pinnies on and in next to no time, the house would fill with the delicious smell of freshly baked scones and cakes.  So what happened to change that?

We’ve been pondering the fall and rise again of home baking (pun intended). Life is very different now to our mothers’ or grandmothers’ days.  Lunch used to be the main meal of the day. Companies had staff canteens providing a mid-day meal. Take-away sandwiches hadn’t yet been invented.

Instead of eating dinner in the evenings as most of us do now, ‘high tea’ was served.  A high tea consisted of something savoury – Welsh Rarebit or beans on toast, perhaps – followed by cakes or biscuits, often home-made.

Afternoon tea was popular for daytime entertaining or a weekend family treat.  Delicate sandwiches, scones and an assortment of cakes were served. Tea (the meal) was a popular social event. Ladies would put on their best frocks, hats and gloves and go out to tea with their friends – these were the ladies who tea-d rather than the later generation who lunch.

But the 1960s saw a change. Bras were burnt (actually that’s a myth!). Women wanted careers and equal rights.  Their days of slaving over a hot stove were numbered. But juggling jobs, families and homes meant time was at a premium.

The supermarket revolution meant busy women who didn’t have time to bake could take their pick from a dazzling array on the well-stocked shelves.  Mr Kipling and his ilk ruled. Was this the first of the nails in the baking coffin?

The demise of baking continued as cookery was dropped from the school curriculum.  New generations grew up with no idea how to whip up a sponge, let alone make their own pastry.

Although TV cooks like Fanny Craddock and Graham Kerr (the Galloping Gourmet) came to our screens in the 50s and 60s, the huge surge of interest in cookery programmes didn’t start for another 30 or 40 years.  In the 90s, the television cookery revolution started with programmes like Ready Steady Cook and MasterChef.

TV companies know when they’re onto a good thing and in 2010, the Great British Bake Off hit our screens. Did you know some 12.3 million people tuned into this year’s Bake Off final? I’m not a media specialist, I’m a food marketer, but it doesn’t take much to work out that producing a ratings-buster like the Bake Off is a whole lot cheaper than making something like Downton Abbey (around £1 million an episode, incidentally). 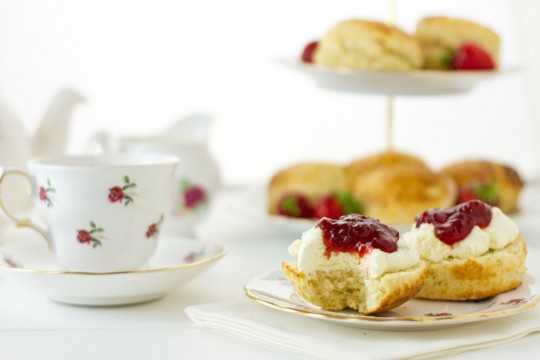 We mustn’t forget the vintage movement which came to life in the ‘noughties’, either. Wartime songs and vintage fashions were no longer old-fashioned – they were cool! Elegant afternoon teas became the recreation of choice for the vintage-mad masses.  On-trend brides have tea-party receptions. China tea sets, languishing in a forgotten corner of Grandma’s attic, were brought out, dusted off and fought over.  Social media is filled with pictures of triumphantly presented home-made cakes and pastries.

Alongside all this came the ‘grow your own’ revolution.  Hugh Fearnley-Whittingstall wasn’t just growing his own food down at River Cottage, he was cooking it. In his spare time, he was writing must-have recipe books telling us how we can do it too. Although I doubt Hugh F-W single-handedly brought back the art of artisan bread-making, I’m sure he must take some of the credit.

Media is a huge influence on everyone’s lives today, but we had to complete our musings with some good old-fashioned economics.  Was the credit crunch and resulting recession an influence in the baking revival? Belts were tightened. And if you can’t afford to buy those little luxuries any more, there’s only one answer, isn’t there? Make ‘em yourself.

I don’t know if we’ve managed to uncover the reasons why we’ve become a nation of home-bakers again. One thing’s for certain, it’s been fascinating reflecting on it.  Whatever the reason, we just hope it’s here to stay and that home-baking is a skill that gets passed down to future generations long after the Great British Bake-Off fades from our screens.