I’ve been really heartened by the number of people on social media and in the press offering to help the homeless this Christmas. The number of people sleeping rough on the streets of England has risen by over 50% in the past five years. According to the annual Government ‘street count’ published in February 2015, bed is a cold, hard pavement for 2,744 people.

I have to wonder about the accuracy of this statistic. How do you count homeless people? And how many of them want to be found and counted? This figure was the people who were sleeping on the streets on one given night. Interestingly, that’s quite different to the number of homeless people. Local authorities have a statutory duty to house homeless people, providing they can tick the right boxes, of course.

According to Crisis, 280,000 homeless people approached councils for help but only 112,330 made a homelessness application. Does that mean less than 50% of these people were eligible? There are just over 35,000 hostel bed spaces for homeless people in England. So where do the other 167,000 people go each night? It’s a shameful situation for a so-called civilised nation.

While I applaud everyone’s efforts to help provide food, clothing and comfort to those very needy people this Christmas, I can’t escape the conviction that come January, nothing much will have changed. Of course it’s wonderful that so many people want to help, but please, please remember that the basics of food, warmth and shelter are not just for Christmas. It’s an all-year round problem that doesn’t miraculously go away on January 2nd.

If the number of people on the streets wasn’t enough, it now seems that our democratically-elected councils are threatening to take New York’s lead and fine people who have the effrontery to sleep on the streets!

The London Borough of Hackney’s cleverly thought-through plan (NOT!) was to issue £100 fixed penalty notices to the homeless sleeping on the street. And if that didn’t help, the courts had the power to increase the fine to £1000! Which half-witted idiot came up with that one?

Where exactly is a homeless person going to get the money to pay a fine? Let’s take it a bit further… who issues the fixed penalty notices? The understaffed and over-stretched police force? But hey, we won’t worry about that. Just take them to court – how do you post a summons to a homeless person? If they do make it to court, they’ll get Legal Aid. All those lawyers and judges can get fatter as the poor get poorer. And if a homeless person can’t pay, surely the overstretched prisons can squeeze a few more in. Fortunately some common sense prevailed as it did in Oxford, and the plan was scrapped. 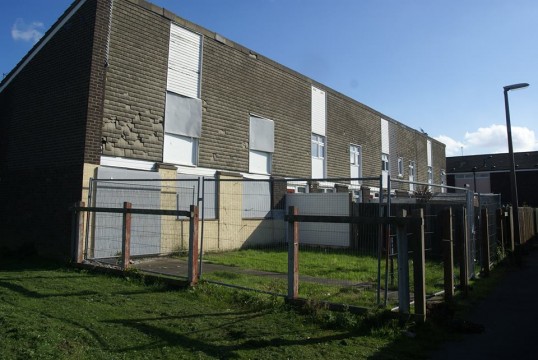 In every town and every city, there are buildings sitting empty. The Empty Homes Campaign is fighting to get these 600,000 homes in use. What about the empty commercial properties that could be converted into shelters and hostels? In Scotland, Shelter is working on a project to do just that.

There are millions of tonnes of food being wasted right here – in the UK – in our own backyard. So why are people condemned to a life on the streets when there is shelter available? Why are people starving when we wantonly throw away perfectly good food?

The Junk Food movement is gaining ground and only this month a new initiative to distribute unused food to the homeless has been launched by three young men in London. But as I said about hospital food and the bigger picture, this is a problem that won’t go away without some joined-up thinking.

But for the moment, let’s all do everything we can to help. Charities like Crisis, the Salvation Army, Shelter and Centrepoint urgently need donations and volunteers. If you know of anyone living or sleeping rough on the streets, you can contact Streetlink. They will arrange for them to get access to the available support services.

Finally, please remember that until every last person has a roof over their head, they will need food, shelter and compassion 365 days a year – their problem isn’t just confined to Christmas.