As you know, the Nina & Co. team are champions of ethical food production and animal welfare. Sadly, at seasonal times of the year, ethics and welfare often take second place to greed, sales and profit. This exclusive report by the Nina & Co. team uncovers the horrors and hardships of seasonal egg production.

Like Christmas, Easter is steeped in tradition, but today it is more about commercialism than the religious festival. One of the best-known and best-loved traditions is the giving and receiving of Easter eggs. But this tradition is now at the forefront on one of the worse food scandals ever encountered by Nina & Co.

Early in 2017, Nina & Co. was approached by Avian Egcellence, a UK-based animal welfare charity dedicated to fighting the cruel and unusual practices used in factory Easter egg production. We succeeded in planting an undercover reporter in one of the UK’s largest Easter egg factory farms. Even we weren’t prepared for the horrors witnessed during our investigation.

History of the Easter Egg

Records show the earliest Easter eggs were hard boiled eggs, often dyed and painted in bright colours and patterns. The egg was rolled across lawns or down grassy banks on Easter Sunday morning. When the shell cracked, the egg was peeled and eaten. 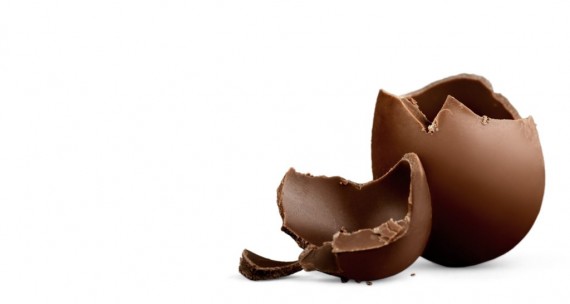 You might be surprised to learn the first chocolate eggs were introduced in Victorian times in Europe. Belgian farmer Rafael Le Bonbon was cleaning his hen house when he accidentally discovered his birds had a taste for chocolate. Monsieur Le Bonbon had dropped a piece of chocolate and was shocked to see his hens fighting over a tiny crumb.

As the farmer’s flock grew in number he experienced difficulties getting them into the safety of the hen house at night. After losing almost half his flock to foxes, he hit on the idea of using chocolate to tempt the hens into their quarters.

One hen, Candice, became so addicted to the chocolate that she was frequently found ransacking the farmhouse kitchen in search of her favourite treat. After a particularly successful foray into the kitchen, Monsieur Le Bonbon was surprised the next morning to discover Candice had laid an unusually dark brown egg. On inspection he realised this egg was, in fact, chocolate coated.

It is believed that it was this accidental development of chocolate eggs that led to the French word ‘bonbon’ (sweets). In addition, the USA name for chocolate – ‘candy’ – is thought to be a shortened form of Candice.

In the first half of the 20th century, chocolate eggs were a luxury. Before the development of harmful artificial fertilisers and pesticides, free range organic production was the norm. During WW2, rationing meant a return to the traditional coloured and painted boiled eggs, and even they were in short supply.

Until the 1980s, chocolate eggs were only available at Easter. But with the rise of the supermarket culture the demand for out-of-season foods grew, and traditional Easter egg breeders could no longer meet demand. Like other UK food producers, many were being forced out of business by high rents and rising feed prices. The price of cocoa beans has doubled in the past twenty years.

Britain’s first Easter egg factory farm, with some 5,000 laying birds, went into production in 1997 in a remote part of South Lincolnshire. As a clandestine operation with high levels of security, accurate statistics are not available. Avian Eggellence estimates there are now as many as five million battery Easter egg hens in factory farms across the UK.

Patty Mason, our undercover investigator, takes up the story …

When you walk into the sheds, the first thing you notice is the sickly, sweet pervading smell. You can’t escape it. It filters through your overalls and clothes. It gets in your hair and in your skin. It’s a horrible combination of sugar, warm chocolate and excrement.

Then there’s the noise. Not the comfortable sound of clucking you find on free range Easter egg farms. It’s the panicked cry of birds retching and choking on fondant, mallow and toffee.

They took me first into the reception shed. That’s where the newly-hatched chicks called ‘choklets’ come when they arrive. Any Albino choklets are immediately separated out. Because they’re very rare and expensive and lay white chocolate, they have to be kept apart from the others to preserve the purity of their eggs. 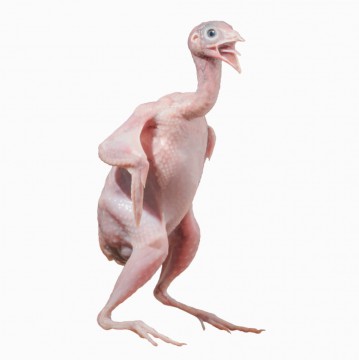 When the choklets are about 4 weeks old, the best specimens are selected and moved into the fattening shed. Here the little birds are force fed a special fortified cocoa bean feed. At six weeks old, the choklets are ready for processing. Their feathers are stripped and the innards removed until all that’s left is a crisp brown shell.  Then they’re tightly sealed in brightly coloured foil shrink-wrap before being shipped off to the wholesalers and supermarkets. If you thought chocolate chickens were made in moulds, think again!

The first job in the morning in the main sheds is to pick up any dead birds. They go off to another part of the factory to get any excess chocolate scraped off before they’re incinerated. It’s heart breaking.

Mostly the choklets die from hypothermia because the sheds have to be kept cool to stop the chocolate melting. I was given a little gadget called a stethoyolk to check they’re not still alive. It’s really hard to tell. Their little bodies and feathers are cold and stiff with encrusted feed. Their skin’s raw where the other choklets have pecked them to get the chocolate off.

The young laying choklets spend six weeks in the ‘empty’ shed. Because they’re young, they only lay hollow eggs. Their food is rationed, not just because the cocoa beans are expensive, but because it stops the shells of the chocolate eggs getting too thick. If they’re too thick and the eggs are too big, the supermarkets reject them.

The older choklets are moved into the filling shed and this is an awful place. They’re force fed toffee and mallow, and creamy sugary stuff. But they can’t eat it. Their beaks get all stuck up and it runs down their breast and gets matted in their feathers. 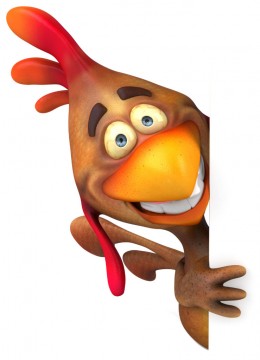 In free range Easter Egg farms choklets are fitted with prosthetic teeth called ‘hentures’ to help them chew the fillings. But one of the other staff said the factory didn’t bother because they were too expensive and there was no law about it yet. He said they probably wouldn’t have to worry, anyway. According to him, the British Idiom Society was going to fight the use of hentures in the courts… all because people could no longer use the term ‘rare as hen’s teeth’.

The lab’s the worst place though. That’s where they do all the product development. I saw them force feeding silver foil to the choklets. Some had ground up foil flakes to peck at like grit to try to get them to lay ready-wrapped eggs.

There’s a big cage of obese hens. They’re so fat they couldn’t move even if they wanted to. Their wings bulge through the sides of the cage next door. They’re being intensively fed on a diet of yellow fondant to produce double yolk crème eggs.

I hope between Avian Egcellence and Nina & Co. we can stop this terrible abuse. These lovely little choklets shouldn’t be kept like this. Please, please, join the fight.

Because of strict security at the Easter egg factory farm, our undercover investigator had to leave her mobile phone in her locker. In the past, choklets have attempted to escape by posting help messages on social media site, Twitter.

Just making sure you only buy locally produced free range Easter eggs will make a difference. Look out for the Avian Egcellence quality marque. It’s on every Easter egg laid by an ethically reared chicken.