Oh sorry… I didn’t realise you were there… I was miles away! On my smallholding, in fact.

I was just enjoying the view watching Derek & Clive (my pet donkeys) grazing quietly in their paddock. Ethel and Stan, my Gloucester Old Spots, are enjoying a wallow in the mud, and Captain’s standing guard over the vegetable garden lest a stray bunny breach the defences.

Of course, I don’t actually have a smallholding, but remember the song ‘Happy Talk’ by Captain Sensible, (our Captain’s name sake)?

How you gonna have a dream come true?

I’m just one of millions of people up and down the country who dream of living a better life. Imagine being able to grow all your own veg, enjoy eggs from your own contented chickens, and knowing exactly what you’re putting on your plate each day.

Those of us who didn’t catch the self-sufficiency bug from reading John Seymour’s book undoubtedly caught it from Tom and Barbara in the Good Life. While self-sufficiency was big in the 60s and 70s, the concept has never been so popular than it is today. And the more I think about life on a smallholding, the more it makes sense. 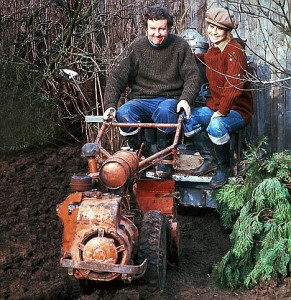 Think about the bigger picture. The world’s population is growing and there’s not enough food to go round. Land, so desperately needed for food production, is being given over to biofuel crops in the quest for a greener alternative to petrol, so we can continue to drive our gas-guzzling cars. According to Oxfam, 900 million people are going hungry every day, and it’s getting worse.

Here in the UK, we think of famines and droughts as being something that only affects other countries. It’s easy enough to send some money to a famine appeal, smugly confident that it will never happen to us. But floods and droughts are causing crops to fail and prices to rise – and that’s right here in the UK.

Surely it makes sense to put our green and pleasant land to good use. Instead of being just a pipe-dream, smallholdings can make a valuable contribution to the food chain and our economy. According to the Low Impact Living Initiative, smallholdings are more environmentally aware, provide more employment, and are more productive per acre than large farms.

With all these powerful reasons for turning our dreams into reality, I wondered why more of us weren’t actually doing it. Then a chance conversation made me realise that achieving the dream wasn’t nearly as easy as dreaming the dream.

If you want to become a smallholder, you have to either rent or buy a property. But nowadays, smallholdings for rent are rarer than the proverbial hen’s teeth. You might find a house to let with some land, but without a secure tenancy, you could sink huge sums of money into your venture, only to become homeless (and penniless) within a few short months.

Cash-strapped councils, which traditionally rented farms and smallholdings to tenants, are selling their assets like hotcakes. In recent times, council-owned farms have decreased by more than 25%. But even if you found a council farm, you’d need experience to qualify as a tenant. Well, that lets us dreamers out, then.

So if renting’s out, we’re going to have to buy our smallholding. That can’t be too hard … can it?

A networking pal, unbeknown to me, has been trying to turn this very dream into reality for the past 3 years. And the bottom line appears to be … if you don’t have shed loads of cash … you can kiss your smallholding dream goodbye. This is what they found out …

Mr and Mrs X (for want of better names) and family decided they didn’t just want to dream about a better life, they were going to actually do it! With two houses to sell and a not-insubstantial deposit, they would seem to be in a strong position.

Of course, setting up a smallholding needs investment, so they’ll have to keep money back for this. But that’s OK – isn’t that what mortgages are for?  On paper, it makes perfect sense. By combining the outgoings of two households, they’ll cut their living costs by 60% (mortgage payments, council tax, utilities, etc). Mr and Mrs X are self-employed and have a portable home-based business, which can service the outgoings.

And that’s where it all fell apart. Because lenders and their infernal computers are risk-averse and can’t, won’t, and don’t listen to reason.

If you’re serious, the first thing you’ll have to consider is location. Unless you already live in a rural area, you’ll have to relocate. Property prices in Lincolnshire and parts of Wales and Scotland are lower than other areas. But of course, relocating means giving up your jobs and without that income, you won’t get a mortgage. Catch 22, eh?

Family X found a very affordable smallholding in Scotland. The lenders refused to consider it because it was ‘too remote’! Of course it was remote – it was a ‘expletive’ smallholding, for heaven’s sake!

Increasingly, more families are pooling their resources hoping to invest in a smallholding. Ever tried getting a mortgage for four people? Forget it! The computer will say no. But Mr and Mrs X found a chink of light at the end of that particular tunnel. The folk at Natwest had a four-person mortgage. But hang on a minute … more than two acres? Forget that too – they won’t look at properties with that much land.

Even if you did find a four-person mortgage, remember it will have to be repaid by the time the oldest person reaches the age of 70. After that, they’ll be too old.

Perhaps Mum and Dad could sell up and lend the younger generation the money to fund the smallholding deposit. Great idea! Sorry… the lenders wouldn’t like that either. If they had to repossess, someone else would have a financial claim on the property.

Mum and Dad could be generous and gift their money to the family. That would work, wouldn’t it? As long as you don’t tell the lender you’re all planning to live together! Because they’d view Mum and Dad as sitting tenants and guess what? Exactly. Back to the drawing board… 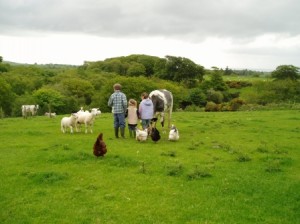 So how about explaining to the lender that the smallholding would be a commercial enterprise and bring in its own income. Horror! You want to run a business from your home? No chance. Back to the drawing board…

If you look around, you might find some great smallholdings at silly prices. But beware of agricultural ties (known in the trade as ag-tags). This is a condition of occupancy that states the owner’s main income must come from the land.  These were originally larger farms where the land has been sold separately, leaving just a few acres to accompany the house. With today’s property prices, you couldn’t hope to earn enough from a few acres to service a mortgage. Oh and did we mention the lenders won’t touch a smallholding with an ag-tag? Any space left on that drawing board?

So where does that leave us? Here’s the stark reality of the situation … if you don’t have the cash to buy your smallholding outright, you need enough income to qualify for a mortgage. If you have to relocate and give up your job, you won’t have an income, so you can’t get a mortgage.

Standard domestic lenders don’t like remote properties. Nor do they like properties with more than a couple of acres of land. If you say you’re going to run your smallholding as a business, you won’t qualify for a domestic mortgage. And unless you have a huge deposit and experience, and can prove you can earn enough from your smallholding to service the loan, you won’t get a commercial mortgage either.

There are some specialist mortgage companies who will lend on smallholdings, though.  But like all the rest, you’ll need to be employed and have a guaranteed income before they’ll consider you.

I was shocked to find out just how impossible owning a smallholding really is for the average person. Mr and Mrs X tell me they have seen countless smallholdings that have been on the market for years because nobody can get the funding to buy them. Many are sitting empty with their land and buildings deteriorating for exactly the same reason.

And all this is going on while Government and its agencies voice concerns over food policies and the economy. It’s just another example of the nonsensical world we live in.

Mr Cameron, I suggest you and your cohorts do something positive and help people get out of this funding trap and into smallholding. Not because we’re dreamers who want the good life… but because our nation’s future food security is going to depend on it.