If you’re a regular to this blog, you’ll know I’m always harping on about the traceability of the food we put on our plates. When I investigated the plight of the not-so-happy chickens, I was sickened by Viva’s video exposé.

How many of us will ever look at burgers in the same light again after it was revealed we could be eating horse instead of the succulent beef we were promised?

But what about that farmyard favourite – the pig?  How does pork measure up when it comes to ethical production? The humble pig is one of our greatest and most versatile food sources. From the traditional roast with its layer of golden, crispy crackling to the smell of bacon sizzling in the pan, there’s no doubt Britain is a nation of pig lovers… or are we? Do you know how that pork on your plate was reared? And are our European neighbours so discerning?

Firstly, let me say British pork is the finest in the world and the UK was one of the countries leading the way in the banning of inhumane treatment of pigs. So it’s important we all get behind the UK pig farmers and insist on home-reared pork.

But European pork is a tale of politics and a blatant disregard for the law and animal welfare. You’ve guessed it. I’m banging on about sow stalls.

If you’re not sure what a sow stall is, let me explain… but first let me tell you Britain banned the use of them in 1999…

Sow stalls are used in intensive pig farming as a means of increasing production and reducing costs. Their use can only be described as cruel and unusual.

The sow is kept in a narrow ‘cage’ (the sow stall) throughout her pregnancy. She has no bedding to lie on and she has no space to turn round. At best, she can take a few steps forwards or back. She has to live, eat, sleep, and even defecate in this stall for the duration of her pregnancy – that’s 3 months, 3 weeks and 3 days.

Pigs are naturally active creatures. They’re curious and spend their time rooting, foraging and exploring their habitat. The only thing a pig in a sow stall has to look forward to is chewing the bars of her cage to vent her boredom and frustration.

If you haven’t got a strong stomach, you’d better not watch this video on sow stalls from Compassion in World Farming.

Isn’t it about time something was done about it? Yes and it has been! But across Europe the law on the ban of sow stalls is being flouted. The NPA (National Pig Association) reckons up to 40% of pigs in Europe are still being reared in sow stalls. So much for the clout of the EU, eh?

The EU legislation came into force on the 1st January this year. The NPA reported that only five of the EU member states were fully compliant with the ban. While some countries had reached around 90% compliance, others were way behind. In January 2013, France was only 33% compliant and Germany had reached 48%.

In February this year, the EU Commission told nine countries to clean up their act. That gives them two months to respond and another two months before they have to do anything about it. Is that it? Is that the best the might of the EU can come up with? At 40,000 an hour, how many pigs will have to suffer in the meantime, and what’s the guarantee those farmers will comply anyway?

So what can we do about it? As consumers, we have a voice and it’s up to us to use it. I refuse to buy imported pork because I don’t want to eat meat from animals that have been ill-treated. Buying home-reared pork also means I’m supporting our British farmers, who are doing a great job under very difficult conditions. 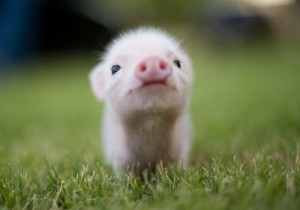 While we might be able to dictate what we put on our plates at home, how do we know what we’re being served elsewhere? Well, thanks to the folk at the NPA, you can now make an informed choice and avoid the unethical suppliers.

Visit the National Pig Association Wall of Fame and find out for yourself. Support the suppliers mentioned here and boycott those that aren’t.