Home
|
Food>Ethical
|
Vision, determination and one man’s quest for ‘it!’
September 22, 2013 Food>Ethical, local and sustainable|Strategy
0

We’re all so self-absorbed these days. I hold my hand up and admit it freely. We get wrapped up in work and family affairs and rarely spare more than a passing thought for things going on in the world around us.

Then you meet someone like James Togut founder of The Good Life For All  and realise that it’s wrong. There are just not enough inspirational people like him around. People who care passionately about our planet, the other people in it, and those who have yet to be born.

I’m not talking about gushing do-gooders or tree-huggers. Just someone who, in a quiet and reflective way, is working towards making the world a better place.

Let me tell you James’ story. It hasn’t got an ending, but knowing him, there will never be one – his work and aspirations will continue to evolve for many years to come.

We’ll start with a young man in his 20s who went to work in Bangladesh teaching English at the British Council. He’d never been there before and wanted to experience a different world. James quickly realised that while many Bangladeshi people had few material possessions, their true wealth was in their strong social ties.

Here in the UK, even people who consider themselves to be badly off still have so much more by comparison to people in countries like Bangladesh. Often even those with an abundance of wealth and possession are still not content. Why is this? Even in his 20s, James was searching for answers to big questions.

After Bangladesh, James went on to work for 15 years in the charity sector because he ‘wanted to help’. His role in communications and publications made a difference to diverse issues like human rights, older people, the environment, crime reduction, and people living with HIV.

But still his questions remained unanswered. A little like Tom Good in TV’s Good Life, perhaps James was searching for the elusive ‘it’.

When, like many people, James was made redundant, he had time to think about his future. In the end, research and self-reflection led him to life coaching. So he trained for his new career. Yes, he enjoyed it and found it satisfying, but it wasn’t enough. He couldn’t see how this connection with people translated into their relationship with the world and their place within it.

James still hadn’t found ‘it’, but he was getting closer. He realised how interdependent we are on others in the world. And, like ripples in a pond, how our actions can impact others, even at the other side of the world. For example, how much did the UK’s demand for cheap clothes contribute to the Bangladesh clothing factory disaster where more than 1,100 people died?

The birth of the Sunshine Bank

James’ thoughts led to the subject of money and to the gift economy. And from that, the Sunshine Bank was born. Lumins, the currency, taken from the word ‘luminosity’, were awarded to people by friends and family for things they did to look after themselves, such as exercising more, stopping smoking, to help others and our planet. It was a revolutionary idea in making people more aware of these interrelationships. It was a step closer to ‘it’, but not close enough. 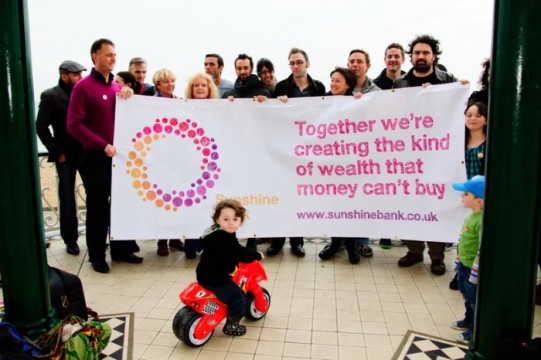 During his journey, James realised that people accept change more easily in stages. Gradually things become accepted as normal and everyday, when baby steps are taken. And the second iteration of the Sunshine Bank used this principle.

This time, the bank focused on charities and businesses. Based on the ‘Waitrose green token’ concept, businesses donated money which was divided between three local charities. Supporters voted with virtual green tokens to determine how much each charity received. The virtual tokens became a means of recognition. For example, businesses could use them to reward and thank staff for good performance. But this wasn’t enough, so the development continued.

The third generation of the Sunshine Bank went still further. Working with his local council (Brighton & Hove City Council) who were keen to reward volunteers, the Bank became a way to recognise charitable action and motivate local people. The council offered rewards to people working in the community, such as free entry to the Brighton Pavilion and swims in one of the local pools. Local businesses got involved offering free goods and services and five charities benefited. The pilot scheme generated lots of learning but more work was needed to really give it traction. ‘It’ was close, but still just out of reach.

From Sunshine Bank to CityMakers

As the Sunshine Bank grew, James was contacted out of the blue by international competition organisers, Cities Pilot the Future who had heard of his project. They liked the idea and thought it would work well in Spain. The Sunshine Bank was to enter its fourth generation, but under a new name. CityMakers had arrived.

Like millions of others, James had been inspired by the Olympics. When the London 2012 organisers tried to recruit volunteers, the response was poor. But with some clever marketing and renaming volunteers as ‘Games Makers’, the floodgates opened. 70,000 people, who suddenly perceived themselves to be part of this huge event, were recruited. It was clear that with the right circumstances and presentation you can inspire action.

CityMakers took this a stage further. Instead of encouraging folk to get involved in a one-off event, the CityMakers concept was to involve people in the longer term to make their city a better place to live and work in. And this was the competition entry put to Cities Pilot the Future. 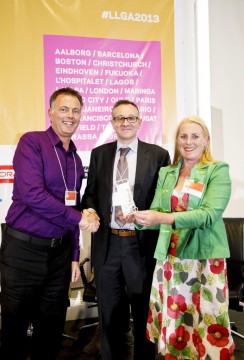 CityMakers was short-listed in both Spain and Argentina. Co-incidentally, it turned out James knew another short-listed entrant. Cat Fletcher, who runs the local Freegle group, was also in the running. Cat had been a supporter of the Sunshine Bank and had helped to pilot it. What’s more, James and Cat quickly realised that by working together, they would have an even bigger and better scheme to submit for the final round of the competition. Two more international partners were brought in to bring the detailed project to fruition.

And they did it! CityMakers was selected to be piloted in Terrassa, near Barcelona. The project was to involve the best of the Sunshine Bank and the Freegle philosophy of preventing useful goods being put into landfill. The project would cut landfill taxes, reduce the town’s carbon footprint and reward local people for getting involved. On the ground, there would be events and redistribution of unwanted goods to get the whole community involved. 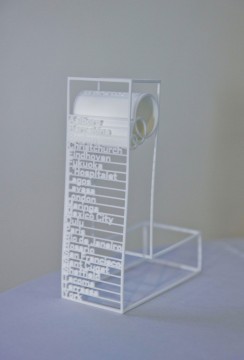 From success to disaster!

But after the euphoria, disaster struck. Officials in Terrassa changed their minds, wanting a different problem to be solved. They were concerned about the problems of social exclusion and loneliness in their city. They wanted a mapping exercise and a project which matched isolated people and their skills with specific tasks in the community to overcome their loneliness and isolation. While it was related to CityMaker’s objectives, it was on a considerably smaller scale. And this is one part of the story which is yet to unfold.

All is not lost…

While this was a huge disappointment, the time and effort has not been wasted. Cat and James are working to launch CityMakers in Brighton & Hove, and plan to licence it to social entrepreneurs in other cities in the UK and beyond.

Already, times are changing. The Transition Towns movement is working to build more cohesive communities and people are pooling their resources to the greater good.

No doubt James Togut will continue to ponder the bigger picture and ‘it’. No doubt ‘it’ will continue to change as the years go by too. But one thing’s for sure… we need more visionary people like James with this sort of determination and commitment to make our world a better place.

James can be found and followed on Twitter @TheGoodLife4All