Starving children with rickets and other diseases caused by malnutrition. No warm clothes to wear in cold weather. Parents collapsing from hunger because they have given all their food to their children. Another refugee crisis? No. A humanitarian crisis? YES. But this isn’t happening in a war zone or a 3rd world country, this is right here. In the UK. It’s on our doorsteps and it’s affecting one in four children. Shocked? Appalled? If not, you should be…

According to the Child Poverty Action Group, around four million children in the UK are living in poverty. Imagine a childhood in the 21st century where being cold and hungry was the norm. Where a child falls behind in school because being hungry affects their ability to learn. We all like to ‘fit in’ and none more so than children. Imagine being one of the few children in the class whose parents can’t afford that fancy dress outfit for a themed day or that nicely posed school photo.

Over a year ago there were press reports of teachers having to give young children food and warm clothes to wear. These teachers spoke of children hiding in the school playgrounds when they should be attending breakfast clubs because they have no money to pay for their breakfast. Schools are allowing parents to charge phones because they can’t afford the electricity at home. A school in Morecambe Bay has a washing machine which is used daily by parents who can’t wash their clothes at home. More than a year later, this is still happening.

The Trussel Trust, the charity which supports the UK’s food banks, shows an alarming increase in the number of people in crisis. 2018 saw an increase of 13% on the same period in 2017. Food banks were virtually unheard of in the UK until recent times. The Trussel Trust’s food bank movement started in 2004, but it was the 2008 credit crunch that saw them grow.

There’s no doubt that food banks are doing a remarkable job, but they can only do so much. Families must be referred by a recognised agency and vouchers issued. There’s not a doubt in my mind that too many people slip through the gaps and are missing out on this vital resource. Some people, I’m sure, are embarrassed about not being able to feed their families, so they don’t apply until they are at crisis point or beyond.

Food banks can’t take perishable foods. While they provide an essential service, children need a balanced diet they can’t get just from tinned or dried goods. Rickets, the horrific disease that was eradicated in the 1950s, is making a comeback. Caused by lack of Vitamin D, rickets softens the bones and results in deformities like bow legs. 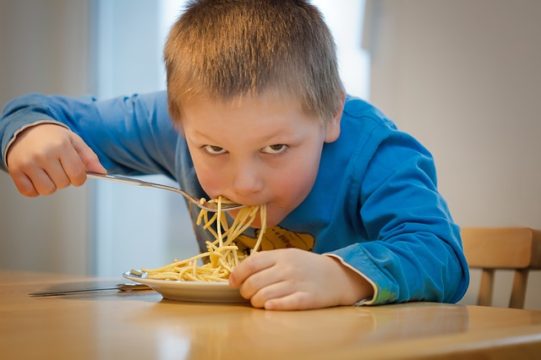 The Real Junk Food Project network is also helping by distributing food. You can eat at a Trash Cafe and some regions have ‘shopping boutiques’ which sell surplus supermarket food. The concept of the Trash Cafes is ‘pay as you feel’. You pay what you think it’s worth or can afford. Of course, if you don’t have any money, that doesn’t help but payment can be made in kind with people trading their time for food. But so many parents on low incomes are shift workers earning minimum wages and simply don’t have the time to spare.

The Child Poverty Action Group predicts, unless something is done, this problem is going to get worse in the next ten years. What sort of civilised society lets its children starve? I’ve said it before and I’ll say it again – we can’t hope to achieve any effective social reform without some ‘joined-up thinking’. Yes, the money to pay for a reform has to be found, but with the current ‘compartment budget’ system, that money will never be available. What do I mean?

Take this report about schools in Liverpool refusing to give children school meals if their dinner money accounts are in arrears. If that child has no money for lunch and no packed lunch, they will be given toast or a bread roll. What sort of meal is that for a growing child?

Schools have to pay for any school meals deficit out of their education budget. If they over-spend on food other school services will suffer. School meals catering is operated by private companies which are obviously not feeding the kids out of the kindness of their hearts. This is a profit-making operation, so that vital eduction money is going into private coffers and share-holder’s pockets. Perhaps it’s time to bring school meals catering back in-house and reduce the costs by eliminating the profit element?

Children’s health is suffering, as is their eduction. Put money into feeding the kids and reduce the NHS bill on treatment for malnutrition-related conditions. How much does it cost to perform surgery on a child with rickets? Fast forward ten years and ask yourself how can those poorly educated children hope to find work and support themselves and the next generation. But that doesn’t affect the schools because it’s not their budget so it’s not their problem.

Children of ALL ages need to have free milk and free school meals. A child doesn’t stop being hungry because it’s finished infant school! The benefit system isn’t working. For goodness sake, why doesn’t someone in Whitehall have the wits to look at this holistically. Forget this budget and that budget. Ultimately, it all comes out of the same pot of money.

Providing free school meals and milk wouldn’t have to be means tested. The administration costs of means testing far exceeds the cost, anyway. But no doubt that would be someone else’s budget so that argument wouldn’t apply! Of course, as well as benefiting the children, offering free milk and school meals to all children would provide more employment – perhaps for the struggling parents, themselves. And it would help increase purchases from British farmers and suppliers! Makes perfect sense to me.

We don’t live in a war-torn country. We haven’t had our crops destroyed by droughts or floods. There is NO excuse for our nation’s children to go hungry. So think of that you politicos when you’re sitting pretty in the House of Common’s dining room. Bet you don’t have to hide in the corridors of power because you don’t have enough money to pay for your dinner.